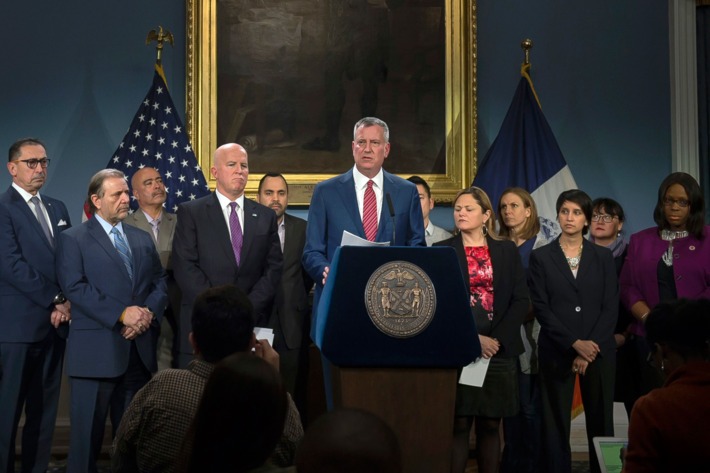 New York City Mayor Bill de Blasio issued a warning to President Trump to take him to court if he tries to cut federal funding away from Sanctuary Cities.

“President Trump issued an executive order earlier today and it’s purported purpose, according to the President was to enhance public safety, but here in New York City and in cities across this nation, this executive order could in fact undermine public safety,” de Blasio said Wednesday evening in a press conference surrounded by Democratic New York officials. “This executive order is written in a very vague fashion. We believe that not only will it be susceptible to many legal challenges, but that it will meet with tremendous public resistance all over the nation.”

De Blasio added, “We believe we are on solid ground to challenge the executive order should the occasion rise and the city of New York will take legal action to stop the executive order from hurting our people. The minute any specific action to withhold funding were to occur, we would be in court immediately in the next hour to stop this attempt.”

“The stroke of a pen in Washington does not change the people of New York City or our values,” de Blasio said. “I think that the president and his team are going to have to look long and hard at the notion of taking away anti-terrorism funding, funding that protects foreign leaders who visit New York City and Trump Tower.”

New York City is among one of the largest U.S. cities that proudly labels itself as a sanctuary city for undocumented immigrants. Nationwide, there are as many as 300 cities that are describe as sanctuary cities.

According to de Blasio, more than half a million of New Yorkers are undocumented immigrants.

“There are hundreds of American cities where this executive order could undermine public safety, create a rift and a disconnect between police and those they serve, and take away federal funding from law enforcement,” de Blasio said. “We will not deport law abiding New Yorkers, tear families apart and leave children without their parents.”

Prior to the nightly press conference, de Blasio unveiled a $85 billion preliminary budget for the year 2017-2018, where the mayor plans to reserve $1 billion of those funds to compensate federal funding cuts in the case the Trump administration would eventually cut federal aid. However, the mayor didn’t specially address how the city funds being reserved are coming from cuts of city agencies or when it is projected to take affect if the federal cuts were to occur.

Regarding federal aid for the fiscal year 2017, New York City is schedule to receive over $8.5 billion in funds. A large portion of the funds is set to go towards law enforcement, with $185 million to Homeland Security and $86 million towards the NYPD.

President Trump on Wednesday afternoon spoke at the Department of Homeland Security headquarters to address two executive orders he has signed regarding border security and limiting federal grants to sanctuary jurisdictions.

“These jurisdictions have caused immeasurable harm to the American people and to the very fabric of our republic,” Trump said.

Other New York elected officials also began to rebuke the President, promising to protect the city’s undocumented immigrants and fight the federal government to prevent such cuts to federal grants.

“Today, we learned of the first step in the Trump administration’s dangerous and misguided attack on immigrants in this country,” New York City Council Speaker Melissa Mark-Viverito told reporters during de Blasio’s press conference. “We will not stand idly while the Trump administration begins to tear families apart. Our laws and policies fall squarely within the law and, therefore, we will do everything in our power to defend them.”

Two years ago, Mark-Viverito using her City Council power enacted laws specially towards removing ICE agents from all of New York City jails and prohibiting city agencies such as the NYPD and public education officials from inquiring about an illegal alien status.

Congressman Joe Crowley, who also was in attendance at the press conference, stated the executive order from Trump “scares the daylight” out of him.

“This is not the American way,” Crowley said. “This is not what we have been about over the last 75 years and Donald Trump needs to hear it. This scares the daylight out of me because it is going to shut down our ability of our law enforcement folks to get information from those who want to expose the criminal elements because those people will fear deportation.”

Senate Majority Leader Chuck Schumer in a statement called President Trump plan are based on “alternative facts” and the solution to the illegal immigration problem is amnesty.

Before Trump took the oath of office, de Blasio has repeatedly bashed the President-elect regarding his views he ran during the presidential campaign regarding illegal immigration. The Mayor has even used this hotly topic to raise campaign funds for his upcoming re-election bid to “stop Donald Trump.”

After Trump signed an executive order to cut federal funding for sanctuary cities, hundreds of protestors gathered in Washington Square Park to protest against the measure taken by the President.