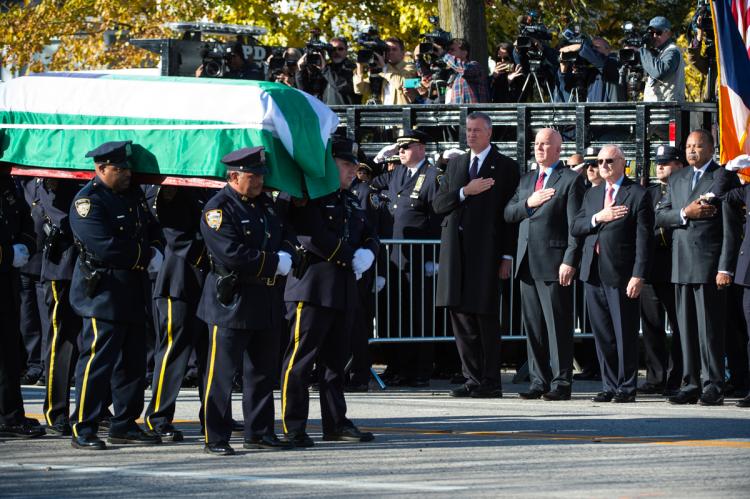 Massapequa, LI. A visible sea of blue from all across the nation gathered outside St. Rose of Lima Church in Massapequa, Long Island, Thursday morning to say a final farewell to a NYPD Sergeant Paul Tuozzolo who was killed in the line of duty last week.

As thousands of officers gathered in Long Island, President-elect Donald Trump called Tuozzolo’s widow, Lisa Tuozzolo, to apologize for not being able to attend the funeral and personally expressing his condolences to her, according to the New York Post.

“I’m very sorry I cannot be there with you today,” Trump told the grieving widow. “My thoughts and prayers are with you and your family during this difficult time. I want to express my condolences from me and my family.”
Tuozzolo, a 19 year veteran was killed last Friday, after responding to a robbery call in the Bronx. The sgt was struck in the head and chest when the suspect, a career criminal Manuel Rosales began opening fire at the officers approaching him inside his vehicle. From two feet away, The Sgt was struck and was later pronounced dead at the hospital, while another officer, Sgt, Emmanuel Kwo was grazed in his right leg, but survived.
A young 25-year-old officer, with only three days on the job, returned fire and killed Rosales — prevent the suspect from possibly killing more officers during the shootout.
The suspect had a long rap sheet, having 17 prior arrest in Long Island and serving three separate stints in jail, between 2002 through 2014. Rosales was free to roam the streets of New York thanks to a liberal Judge who declined to impose a $20,000 cash bond for violating a restraining order.
Tuozzolo, 41 was only two months shy from completing 20 years on the job. A cop who was dedicated to his job of serving and protecting the city of New York, Tuozzolo made the ultimate sacrifice that cost him his life.
During the two and a half hour funeral service, Sgt. Tuozzolo was posthumously promoted to Sergeant Special-Assignment by NYPD Commissioner James O’Neill, promoting a standing ovation during the eulogy.
“Sgt. Paul Tuozzolo was everything we could ever wish for in an officer — conscientious, hard-working, selfless, courageous and driven to protect,” O’Neill said with his voice cracking. “Paul protected all New Yorkers, and he died while keeping people safe.”
The town of Massapequa was shut down for the funeral as residents tied blue ribbons on poles and trees along the mile long route where the funeral was taking place. Various elected officials came to pay their respects Thursday, including Rep. Pete King, former NYPD Commissioner Bill Bratton and NYC Mayor Bill de Blasio. Cardinal Timothy Dolan was also among the thousands in attendance.
“Tuozzolo was a hero by any definition,” de Blasio said during the eulogy. “On his final act on this earth, he served in an exemplary fashion doing his all, giving his all for all of us.”
De Blasio added, ““There’s one fewer dangerous person on the street today because Sgt. Tuozzolo took the lead. That is the measure of the man. He gave his life protecting his fellow officers, protecting all of us.”
The president of the Sergeant Benevolent Association, Ed Mullins, praised the sgt who a member of the union, promising to always be there for Tuozzolo’s wife, Lisa Tuozzolo and his two young sons.
Mullins during his eulogy, pointed out the ongoing war on cops going on across the nation.
“We remain under attack,” Mullins said. “In the past three years, five members of the NYPD were not killed in the line of duty. They were murdered in the line of duty.”
After the eulogies, six officers lifted Tuozzolo’s casket, covered with a NYPD green-and-white flag onto their shoulder and carried him out of the church. Outside the church, officers and mourners stood in silent salute as nine helicopters flew over in a missing man formation.
Tuozzolo is the fifth NYPD officer killed in the line of duty under de Blasio watch as Mayor in two short years.
0 0 vote
Article Rating