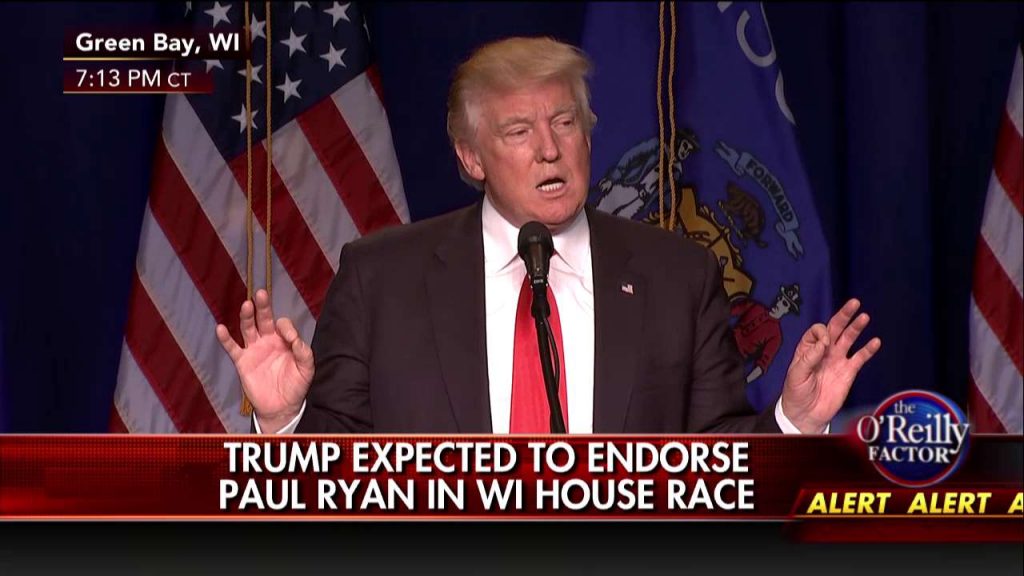 “So in our shared mission, to make America great again, I support and endorse our speaker of the House, Paul Ryan,” Trump said at a rally in Green Bay, Wisconsin. “He is a good man. We may disagree on a couple of things, but mostly we agree.”

Along with endorsing Ryan, Trump also endorsed Senator John McCain of Arizona and Senator Kelly Ayotte of New Hampshire in their primary races.

“I hold in the highest esteem Senator John McCain, for his service to our country, in uniform and in public office” Trump said. “I fully support and endorse his reelection.”

Before Trump publicly gave his remarks of the expected endorsement, which was first reported earlier today by Fox News, Trump stressed the importance of party unity, citing former President Ronald Reagan of a need of a GOP “big tent.”

“I need a Republican Senate and a House to accomplish all of the changes that we have to make so I embrace the wisdom that my 80 percent friend is not my 20 percent enemy,” Trump said. “We need unity. We have to win this election. This is truly one of the most important elections in my lifetime.”

“Given his stature as our party’s official nominee, Mr. Trump’s decision to support the Republican Speaker is appropriate and is a display of true leadership,” Nehlen wrote. “Mr. Trump understands that in his official capacity as our party’s standard-bearer, the Republican Party must unite ahead of November’s elections to fix the critical issues facing our nation.”

Earlier this week, Trump declined to endorse Paul in an interview with The Washington Post, echoing the House Speaker line once used against him that he was “not quite there yet” to endorse.

Regarding McCain in the Washington Post interview, Trump stated he hasn’t endorsed the Arizona senator due to his lack of taking care of the vets in the senate. “I haven’t endorsed John McCain,” Trump said. “I’ve never been there with John McCain because I’ve always felt that he should have done a much better job for the vets.”

“I strongly support Paul Ryan, strongly endorse his re-election,” Pence said in a Fox News interview. “He is a longtime friend. He’s a strong conservative leader. I believe we need Paul Ryan in leadership in the Congress of the United States.”

Ryan was not in attendance at the Green Bay rally to hear Trump endorsement. However, Ryan’s opponent tweeted that he was at the rally and mingled within the crowd.