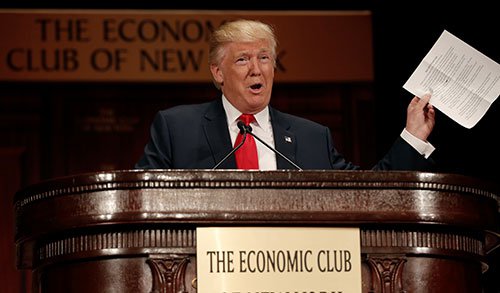 In the Economic Club in NY, Donald Trump announced new changes to his tax plan, a national goal to reach 4 percent in economic growth, resulting in a faster economic growth and millions of new jobs.
“I believe it is time to establish a national goal of reaching 4 percent economic growth that will reduce the deficit,” Trump said to members of the Economic Club of New York at the Waldorf Astoria hotel. “We have put together a plan that puts us on track to achieve that goal that over the next ten years, our economic team estimates the economy will average 3.5% growth and create a total of 25 million new jobs.”
Speaking without a teleprompter, Trump detailed his economic plan, contrasting his plan from his opponent, Hillary Clinton plan in which he states would continue forward President Obama policies that “could cost the economy $5 Trillion dollars.”
“This is the weakest so-called recovery since the Great Depression,” Trump said. “Under the Obama-Clinton polices, the economy grew 1.1 percent last quarter… the last seven years the economy grew only 2.1 percent. The Obama-Clinton policies have doubled the national debt.”
Under Trump’s updated tax reform plan, the GOP candidate announced the “penny plan,” a conservative strategy that entails cutting non-defense and non-entilement net spending by 1 percent each year. He also proposed a reduction of tax code brackets from 7 to 3 — 33 percent, 25 percent, and 12 percent. As for business tax rate, Trump proposed cutting the corporate tax rate of 35 percent to 15 percent, a measure he stated will creature “an explosion of new business and new jobs.”
Trump reiterated his plan on ending the “disastrous regulations” on day one that he states have “grown into a massive, job-killing industry,” by proposing a moratorium on new regulations and eliminating job-killing regulations such as President Obama’s environmental regulations, like the “Waters of The U.S. Rule,” and the “EPA’s Clean Power Plan.”
“Regulations have grown into a massive, job-killing industry and the regulation industry is one business I will put an end to on day one,” Trump stated. “I have proposed a moratorium on new federal regulations and I will eliminate all needless and job-killed regulations now on the books.”
“This includes eliminating some of our most intrusive regulations like the Waters of The U.S. Rule and scrapping the EPA’s so-called Clean Power Plan which the government itself estimates will cost $7.2 billion a year.”