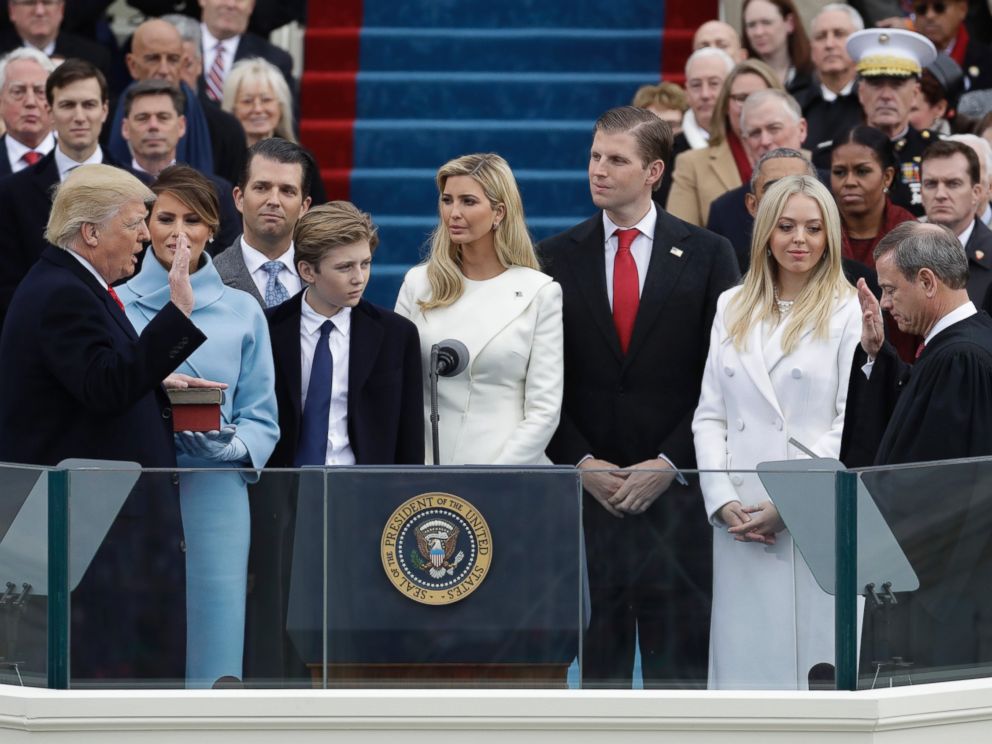 Washington, D.C. — Donald Trump was officially sworn in as the 45th President of the United States, pledging to fulfill many of his campaign themes to “Make America Great Again” by putting “America first.”

“We assembled here today are issuing a new decree to be heard in every city, and in every foreign capital and in every hall of power,” Trump said to a packed crowd of spectators stretching across the National Mall. “From this day forward, a new vision will govern our land, from this day forward, it’s going to be only ‘America first!’ I will fight for you with every breath in my body, and I will never, ever let you down.”

Trump added, “Every decision on trade, on taxes, on immigration, on foreign affairs will be made to benefit American workers and American families. We must protect our borders from the ravages of other countries making our product, stealing our companies and destroying our jobs.”

Supreme Court Chief Justice John Roberts administered the 35-word oath of office to Trump, as the new president placed his left hand on his childhood bible and the bible used by President Lincoln at his first inauguration. Surrounded by elected officials, former president and first ladies along with his family, Trump delivered a 16-minute address, describing the “American carnage” and calling for a return of power to the American people from Washington politicians.

“Mothers and children trapped in poverty in our inner cities, rusted-out factories scattered like tombstones across the landscape of our nation,” Trump said. “An education system flush with cash, but which leaves our young and beautiful students deprived of all knowledge. And the crime and the gangs and the drugs that have stolen too many lives and robbed our country of so much unrealized potential. This American carnage stops right here and stops right now.”

“We will no longer accept politicians who are all talk and no action, constantly complaining but never doing anything about it,” Trump added. “The time for empty talk is over. Now arrives the hour of action. Do not allow anyone to tell you that it cannot be done.”

The road to the White House for Trump shocked the nation, first when he defeated 16 GOP primary opponents, to then go on to pull the biggest upset in history by defeating Democratic opponent Hillary Clinton. Trump became the first U.S. president with no prior government or military experience.

“January 20th, 2017 will be remembered as the day the people became the rulers of this nation again,” Trump said. “The forgotten men and women of our country will be forgotten no longer. Everyone is listening to you now. You came by the tens of millions to become part of a historic movement, the likes of which the world has never seen before.”

The National Mall was filled with many Trump supporters from all across the country, wearing “Make America Great Again” hats while chanting “Trump!” As the TV screens displayed Clinton taking her seat, the crowd began to chant “Lock her up.”

More than 60 Democratic House members boycotted the event. However, Hillary and Bill Clinton were in attendance for the transfer of power. Hillary tweeted shortly before Trump took the oath of office that she came to “honor our democracy and it’s enduring values.”

I’m here today to honor our democracy & its enduring values. I will never stop believing in our country & its future. #Inauguration

Trump made an appeal to those who oppose giving him a chance, arguing that when “America is united” it is “totally unstoppable.”

“When you open your heart to patriotism, there is no room for prejudice,” Trump said. “The bible tells us how good and pleasant it is when God’s people live together in unity. We must speak our minds openly, debate our disagreements honestly, but always pursue solidarity. When America is united, America is totally unstoppable.”

Trump added, “A new national pride will stir ourselves, lift our sights and heal our divisions. It’s time to remember that old wisdom our soldiers will never forget, that whether we are black or brown or white, we all bleed the same red blood of patriots.”

After the swear-in, Trump attended a joint congressional inaugural luncheon in the Capitol before heading back to the White House for the inaugural parade.

During the inauguration ceremony, massive protesters took to the streets in D.C., causing disruptions by blocking checkpoints as others resorted to violence and vandalism. Over 213 protestors were arrested, mostly on the charges of rioting. Six officers suffered minor injuries during the rioting, according to D.C. police chief.

Trump To Throw First Pitch At Yankee Stadium Next Month