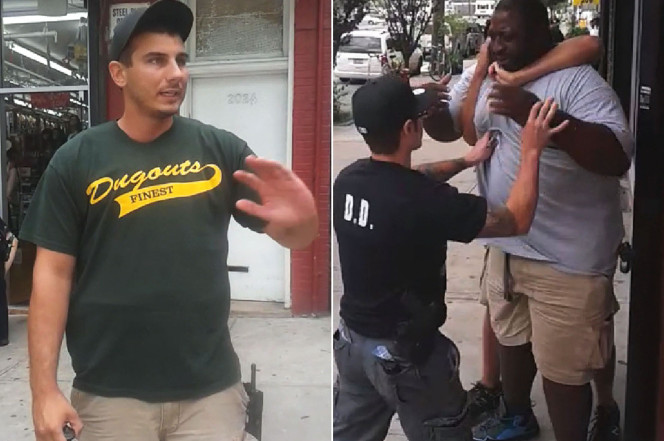 The Justice Department has replaced the New York team of agents and lawyers investigating the death of Eric Garner from the hands of police, raising the possibility that NYPD officer Daniel Pantaleo can face federal charges.

According to the New York prosecutors and FBI agents, they argued the video recorded by a bystander collaborated with Pantaleo argument that he didn’t intended to put Garner in a chokehold maneuver. However, the Civil Rights Division at the Justice Department argue otherwise, stating the same video shows evidence of willful wrongdoing by the NYPD officer.

In Summer of 2014, Garner who weighed over 350 pounds, resisted arrest when approached by officers after being caught selling untaxed cigarettes on the streets of Staten Island. Resisting arrest led to NYPD officers taking down Garner, with Pantaleo applying the chokehold move in trying to arrest the Staten Island man. Garner died an hour later at the hospital with coroners found his serious bad health of obesity and heart disease contributed to his death.

Six months later, the Staten Island grand jury cleared Pantaleo of all charges. The Justice Department under U.S. Attorney General Eric Holder, announced moments after Pantaleo was cleared that it would launch a federal investigation into the death of Garner. The federal investigation was overseen by the federal prosecutor’s office in Brooklyn. Since then, the investigation didn’t move forward, based off the team of agents and prosecutors refusing to bring a case forward.

“The decision to remove the local officials investigating this case is both highly unusual and deeply troubling,” the statement reads. “Two separate investigative teams have already spent more than two years reviewing the evidence in this case, without any action. Now, it appears that they are taking a third bite at the apple in an effort to reach a predetermined outcome. It is time to end this fishing expedition and let Police Officer Pantaleo move forward.”

Garner’s family sued the City of New York for and settled for $5.9 million a year later, but continued to push for a federal indictment against Panteleo.

This isn’t the first investigation the DOJ has launched in attempting to prosecute officers. In the past two years, the DOJ launched investigations into police-involved encounters in Ferguson, MI; Minneapolis, MS; Chicago, IL; North Charleston, SC; and Cleveland, OH.

Out of the five of the recent federal investigation, only the North Charleston officer was the first to elicit federal charges on the police officer for shooting Walter Scott after a traffic stop. The federal chargers stem from Officer Michael Slager telling the state that Scott was moving towards him when firing, misleading investigators with false information, even though the officer body camera showed Scott was running away from Slager.

The other four recent federal charges brought to the DOJ led to no charges being filed against a police officer.