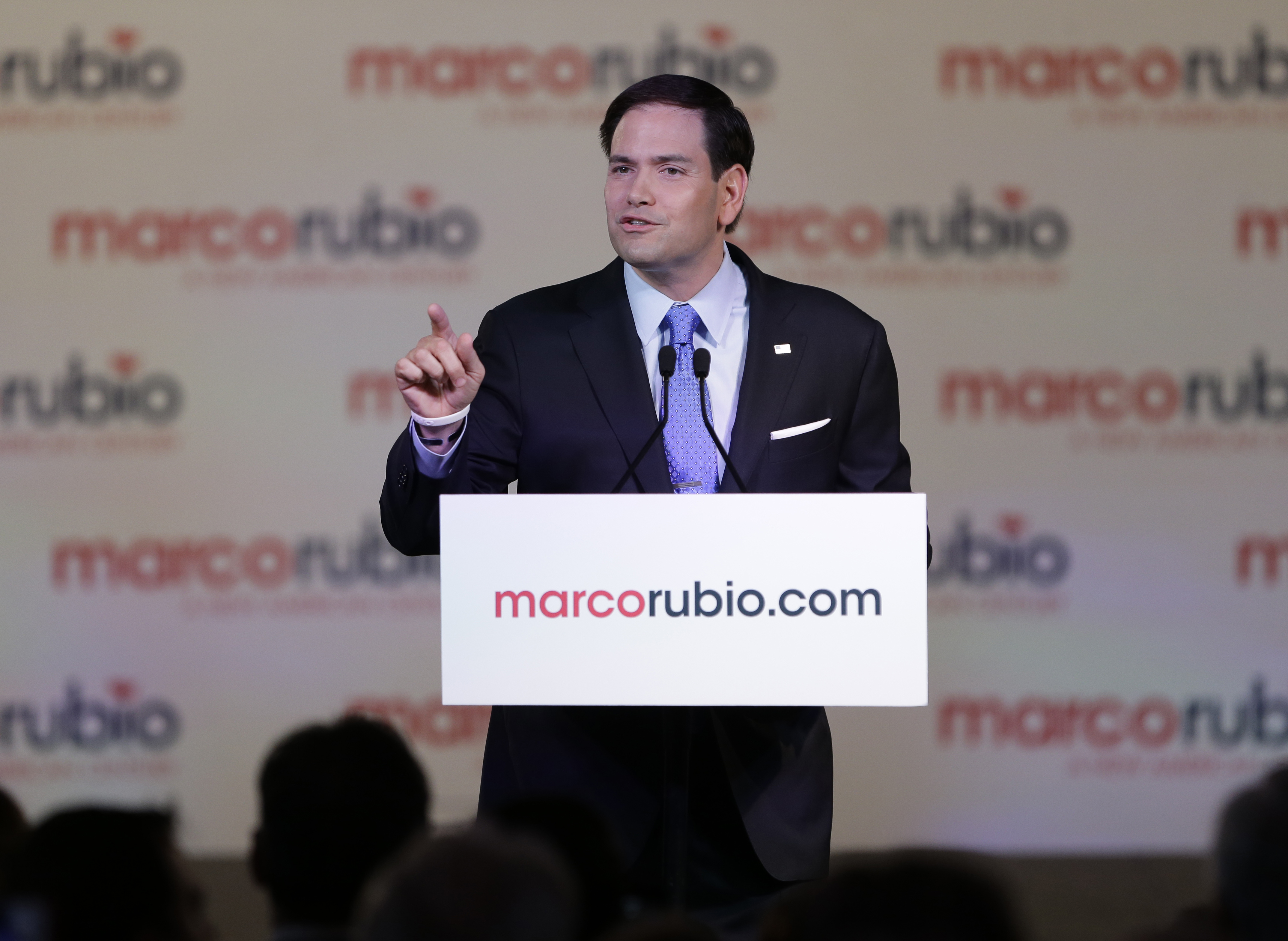 “After months of deliberation and prayer about the future of our country, I have come here tonight to make an announcement on how I believe I can best serve her,” Senator Marco Rubio said, finally announcing the long-awaited bid for presidency on Monday night.

The first term senator from Florida has now become the third Republican to officially enter the 2016 primary fray joining his two other Senate colleagues, Ted Cruz from Texas and Rand Paul from Kentucky.

“In this very room five decades ago, tens of thousands of Cuban exiles began their new lives in America,” Rubio said. “Their story is part of the larger story of the American miracle. United by a common faith in their God-given right to go as far as their talent and work would take them, a collection of immigrants and exiles, former slaves and refugees, together built the freest and most prosperous nation ever.”

Rubio, 43, the youngest candidate in the field, chose the Freedom Tower in downtown Miami just weeks before his announcement. Located in his hometown, its historically known as an iconic Ellis Island landmark for Cuban immigrants in the 1960s that fled the Castro regime. The site holds personal importance for Rubio when it comes to his family and the Cuban-American community.

The timing of Mr. Rubio’s kickoff was seen as a risk of being overshadowed by Hillary Clinton, who formally announced her candidacy the day before in a video that was tweeted online. Rubio didn’t see this as a threat and took a direct swipe at the Clinton announcement emphasizing that he is a new crop of leaders. “Yesterday, a leader from yesterday began a campaign for president by promising to take us back to yesterday,” Rubio said. “Yesterday is over and we’re never going back.”

Rubio also took an implied swipe at former Florida Governor Jeb Bush, his former political mentor. It was rumored that he would sit out of running for president if Bush joined the race:  “I have heard some suggest that I should step aside and wait my turn, but I cannot, I believe our very identity as a nation is at stake and I can make a difference as president.”

Framing his speech of his message of the “New American Century,” Rubio said it has been left behind by the political establishment. “The time has come for our generation to lead the way toward a new American Century,” Rubio said to an audience of over 1,000 supporters. Giving a narrative of his life by telling the story of his Cuban immigrant parents and being an example of what the American Dream looks like. Drawing the loudest cheers when Rubio mentioned the struggles his family endured when arriving in Miami from Cuba in the 1950s. “I live in an exceptional country where even the son of a bartender and a maid can have the same dreams and the same future as those who come from power and privilege.” Rubio argued that now the dream is slipping away for many Americans who are now facing unequal opportunities to succeed.

Rubio is currently trailing behind the increasingly crowded field of Ted Cruz and Rand Paul along with a host of other bigger-name candidates announcing in the upcoming weeks ahead. In order to stand out, Rubio must repair the name damage he created in 2013 for his efforts in sponsoring an immigration reform bill.

The stakes are high for Rubio to win the nomination. The question is will he be able to garnish support in the next 8 months before the first primary in Iowa. Rubio will be in NH this Friday for the First-In-the-Nation two-day summit along with other 2016 hopefuls to give a speech and attend a dinner as well.