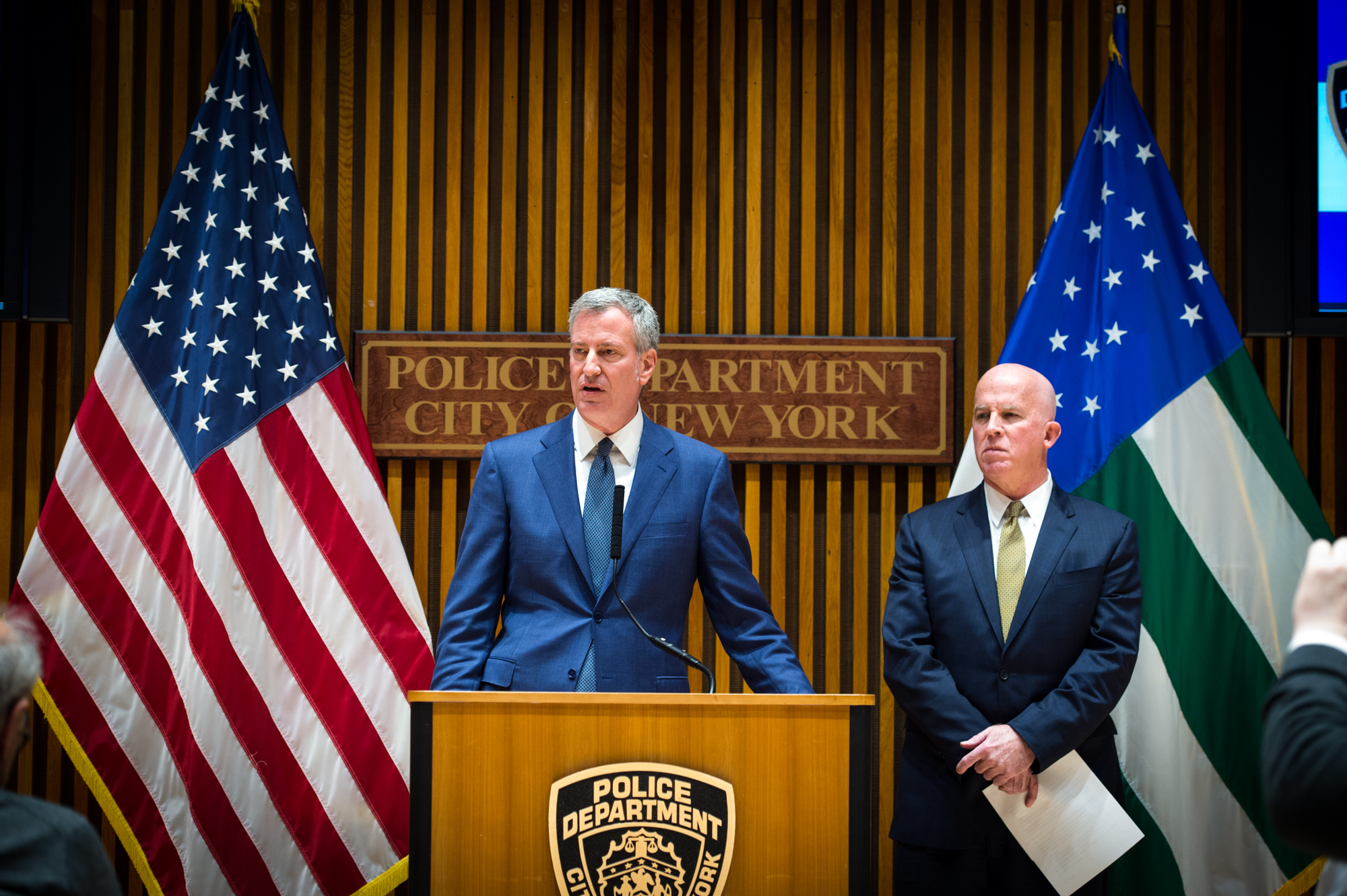 The Department of Justice in a letter on Friday has threatened to cut funding to New York City, as well as eight other jurisdictions that do not fully cooperate with federal immigration agents due to their Sanctuary City policies.

In the statement, New York City was called out for being “soft on crime” due to “gang murder after gang murder” along with other jurisdictions such as Chicago and the California’s Bay area for “crumbling under the weight of illegal immigration and violent crime.”

“Many of these jurisdictions are also crumbling under the weight of illegal immigration and violent crime,” the DOJ statement reads. “New York City continues to see gang murder after gang murder, the predictable consequence of the city’s “soft on crime” stance.”

“We’ve come here to address the absolutely outrageous statement today by the United States Department of Justice,” de Blasio said in a brief 10 minute press conference held in One Police Plaza. “It’s a statement by the Trump administration. And President Trump and Attorney General Sessions have to make a decision immediately about this statement, because it has denigrated not only the people of New York City, but the men and women of the NYPD. It’s unacceptable, it’s outrageous, and it’s absurd.”

De Blasio added that New York City didn’t become the “safest big city by being soft on crime,” and called on both President Trump and Attorney General Sessions to come to New York and tell the NYPD that “believe they are soft on crime.”

“We did not become the safest big city in America by being ‘soft on crime.’ I’ve never met a member of the NYPD who is soft on crime,” the mayor said. “I would say to President Trump and to Attorney General Sessions, if you believe this statement is accurate, come here to New York City, look police officers in the eye and tell them that you believe they are soft on crime. See how that feels and see what the people of New York City will feel about that.”

NYPD Commissioner James O’Neill in a statement released shortly before joining the mayor in the news conference, called the statement a “willful disregard of the facts,” while highlighted the city’s dramatic and steady decline in overall crime.

“The Justice Department’s release this afternoon stating that New York City is somehow “soft on crime” and continues to see “gang murder after gang murder,” demonstrates a willful disregard for the facts,” the statement reads. “New York City is experiencing a steady decline in overall crime that includes major reductions in murder and shootings. Since 1993, murder has decreased 82%, shootings have decreased 81%, and overall crime has decreased 76%. These are the facts.”

O’Neill, in the press conference, said the DOJ statement made his “blood began to boil,” while adding the NYPD “locked up over 1,000 people in 100 gang takedown.”

“When I read that statement by DOJ this afternoon, my blood began to boil,” O’Neill said in an angry tone. “To say we’re soft on crime is absolutely ludicrous. In 2016, we locked up over 1,000 people in 100 gang takedowns. Most of them are still awaiting sentences who are still in jail.”

O’Neill added, “Maybe we should ask them if we’re soft on crime. “

In the statement, if New York City fails to comply with the DOJ condition and submit all documentation to the Office of Justice Programs by the deadline of June 30, the Justice Department warned they will withhold grant funds to the Edward Byrne Memorial Justice Assistance Grant Program. The program was named after a fallen NYPD officer, Eddie Byrne, who was killed in 1988 while guarding an immigrant targeted by gangs for reporting the serious crimes the gangs were conducting. According to the New York State Division of Criminal Justice Services, the grant program uses the federal funds for “state and local initiatives for technical assistance, training, personnel, equipment, supplies, contractual support and information systems” relating to criminal justice initiatives.

According to the Department of Justice, New York receives $4.3 million in federal grant money in 2016.

“Contrary to their alternative facts, New York is the safest big city in the country, with crime at record lows in large part because we have policies in place to encourage cooperation between NYPD and immigrant communities,” Stein said in a statement.

Shortly after the conference, the DOJ responded to de Blasio, criticizing the mayor policies, not the NYPD as the reason New York City is “soft on crime.”

“As made very clear in the department’s release, it is New York City’s policies that are soft on crime,” the Department of Justice said. “Those policies, implemented by New York City’s mayor and his administration, are directly responsible for a dangerous MS-13 gang member walking out of Rikers Island (jail complex) in February. Unfortunately, the mayor’s policies are hamstringing the brave NYPD officers that protect the city, and only serve to endanger the lives of the hard working men and women of the NYPD who care more about keeping their city and country safe than they do about city hall politics.”

Trump Approves Use of USNS Comfort to Treat Coronavirus Patients