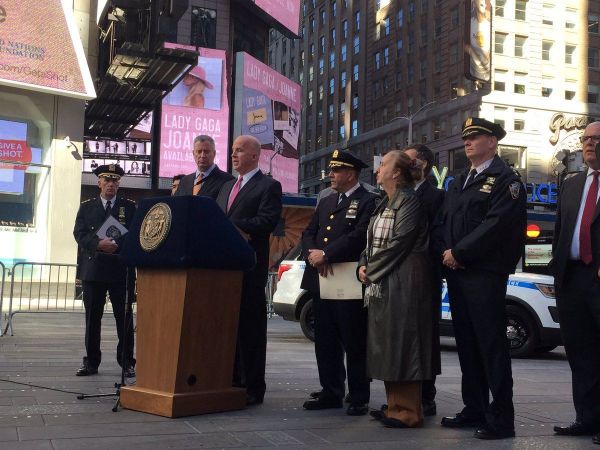 As New Yorkers head to the poll on Tuesday to decide the faith of the next president, the NYPD is preparing to keep New York City secure as both presidential candidates holding their election night parties just blocks away from each other.

Bottom line for all New Yorkers is expected to see a lot of police presence today and tomorrow and know that you are safe and well protected,” de Blasio said. “We have beefed up our ability to handle multiple sites simultaneously.”

With poll sites opening for 15 hours from 6 am to 9 pm along with the combination of reported terrorism threats and voter intimidation and both candidates holding events at night, the NYPD working alongside the Secret Service are on high alert in preparing “the largest election detail” New York has ever had. Over 5000 police officers will be deployed to midtown Manhattan, the center stage where both Hillary Clinton and Donald Trump will spend election night.

“This is by far the largest election detail that the NYPD has ever had,” Gomez said. “More than double the previous year and comparable to New Years Eve and the Pope visit.”

In addition to the 5,000 patrol officers, the NYPD counterterrorism officers, the NYPD Strategic Response Command, Emergency Services Unit, K-9 explosive-detecting team and plain clothes officers will also be “posted at a fixed location” throughout the day. In headquarters over at One Police Plaza, over 50 city, state and federal law enforcement representative will be on hand to help the NYPD in the Situation Room and Emergency Operation Center.

Over the weekend, U.S. intelligence officials intercepted an unspecified Al Qaeda conversation planning to disrupt the election by targeting areas of New York, Texas and Virginia. The threats were vague and no specific target, but law enforcement are taking precaution and ramping up security.

NYPD Deputy Commissioner of Intelligence and Counterterrorism John Miller addressed this issue, telling reporters the alleged threats is no surprise, but it is “part of their M.O.”

“ISIS puts out these threats widely over their social media before many events,” Miller said. “We have seen these threats before holidays, and before special events. This is part of their M.O.”

According to an FBI statement released Friday, federal authorities are working closely with local officials in New York, Texas, Virginia and all over the country to “identify any potential threats to public safety,” and to ensure security is tighter than normal.

The NYPD spokesman stated the NYPD is assessing the credibility of possible terror threat and working closely in conjunction with the FBI and Secret Service, but stated there has been no new information regarding a terrorism threat since Friday  .

“We take any intelligence reports regarding New York City serious,” an NYPD spokesman told Breitbart News. “In this case, I would point out that the credibility of those reports is still being assessed and the information lacks specificity. The information is still being investigated and no new information have come to light since Friday. But we are gearing up to protect New Yorkers on Tuesday and at all times.”

In the case of protestors, another issue law enforcement has taken into account in its massive security planning, de Blasio stated he won’t be surprised if it happens, but the NYPD is prepared to deal with demonstrations if it happens.

“The unusual nature of this election, I think we are not gonna be surprised if there’s any kind of demonstration,” de Blasio said. “There are tremendous NYPD resources in place and they can be kept in place as we go later in the event if this election for example drags on well into the evening. The commissioner is in position to keep officers on duty rather than sending them home, so we will have extraordinary strength levels available if needed.”

Regarding Election Day voting, de Blasio stated each 77 precinct will assign a uniformed police officer to each of the city’s 1,205 polling places, to monitor the polling site with a large turnout anticipated as well as monitoring the results after the polls close.

“We are focused on the big stage tomorrow night but we are also focused on our poll sites all over the city during the day,” de Blasio said. “We have an obligation to protect the voting process so you will see of course the NYPD officers at every poll site around the city,”

De Blasio added, “We will not allow any form of voter intimidation. The NYPD is ready to step in if we see any evidence of that occurring, we have the ability to reinforce those sites quickly and make sure that any pattern of intimidation is snuffed out immediately.”

On the issue of a potential cybersecurity hacking of polling sites and the city’s ability to respond to emergency, Miller told reporters they are “confident” that all systems are free of any intrusions and are “being monitored closely.”

Late last month, the New York Post revealed that the Clinton campaign was planning to have fireworks over the Hudson River after the polls closed in New York. However, it was revealed during the press conference that the fireworks have been cancelled, even though Clinton was granted the permit to have the fireworks display.

“They do have a permit for fireworks, but at this point we believe the fireworks is canceled,” NYPD Chief of Intelligence Tommy Galati responded.

When asked why Clinton canceled the fireworks, Galati told the reporter he “couldn’t tell you that.”

This is the first time since 1944 that both presidential nominees will be in New York City on election night. Clinton will hold its event at the Jacob Javits Center on West 34th Street and 11th Avenue, while Trump will be at the New York Hilton Midtown, located at West 53rd Street between Sixth and Seventh Avenue.