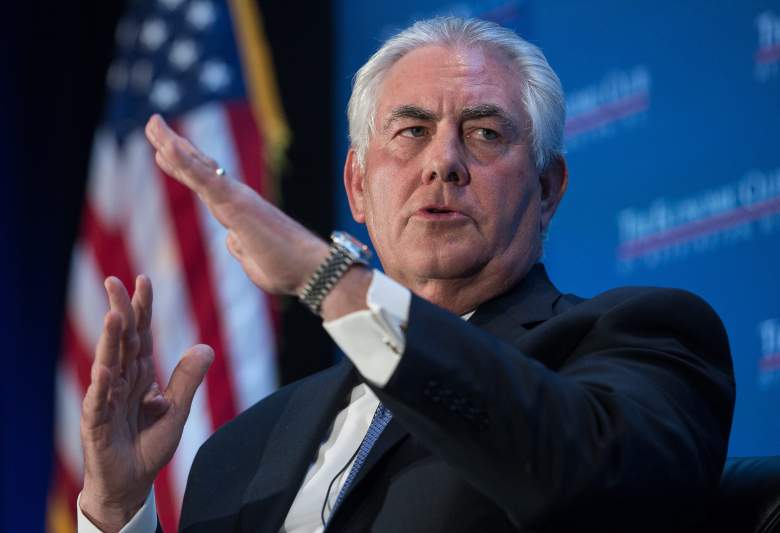 President-elect Donald Trump has chosen ExxonMobil CEO Rex Tillerson for Secretary of State.
In a statement released early Tuesday morning, Trump described Tillerson’s career as “the embodiment of the American dream” and an “excellent choice” based on his broad experience.

“Rex Tillerson’s career is the embodiment of the American dream,” Trump said in a statement. “His tenacity, broad experience and deep understanding of geopolitics make him an excellent choice for Secretary of State.”

Trump added, “He will promote regional stability and focus on the core national security interests of the United States. Rex knows how to manage a global enterprise, which is crucial to running a successful State Department, and his relationships with leaders all over the world are second to none.”

Shortly after, Trump weighed in on Twitter on his selection of Tillerson.

I have chosen one of the truly great business leaders of the world, Rex Tillerson, Chairman and CEO of ExxonMobil, to be Secretary of State.

Tillerson in the news release said he was “honored” with the nomination and he shares Trump’s vision for “restoring the credibility of the United States’ foreign relations and advancing our country’s national security.”

The confirmation process is seen to become a very controversial showdown with lawmakers on both sides of the aisle expressing skepticism about Tillerson in regards to his relationship with Russian President Vladimir Putin. Three Republicans have all reacted critically to Tillerson, a sign that these three might block Tillerson’s nomination.

Senator Marco Rubio on twitter posted his concern of the close ties, stating it “is not an attribute” in becoming a Secretary of State, but says he looks forward to learning more about Tillerson’s background and “ensure he receives a full and fair” hearing.

“While Rex Tlllerson is a respected businessman, I have serious concerns about his nomination,” Rubio said in a statement. “The next Secretary of State must be someone who views the world with moral clarity, is free of potential conflicts of interest, has a clear sense of America’s interests, and will be a forceful advocate for America’s foreign policy goals to the president, within the administration, and on the world stage. I look forward to learning more about his record and his views. I will do my part to ensure he receives a full and fair, but also thorough hearing before the Senate Foreign Relations Committee.”

Sen. John McCain, chair of the Armed Service Committee, said the Senate will give Tillerson a “fair hearing” but noted the ties “should be a matter of concern.”

Sen. Lindsey Graham on Twitter stated he “expects the US-Russian relationship to be front and center in his confirmation process.”

4. . I expect the US-Russian relationship will be front and center in his confirmation process.#Tillerson

However, other Republican lawmakers are praising Tillerson and his qualification for the job.

“We need a full review of our national security policy and I know Rex will face each problem head on with American interests and security as his top priority,” McConnell said. “I look forward to supporting his nomination.”

Sen. Bob Corker, chair of the Senate Foreign Relations Committee and one of contenders for Secretary of State called Tillerson a “very impressive individual” with “an extraordinary working knowledge of the world.”

Rex Tillerson is an excellent choice for Secretary of State. Read my full statement here: https://t.co/Q6v9F9NXM7

W/ the addition of Tillerson, a talented exec & skillful negotiator, @realDonaldTrump seems to be assembling an accomplished & able cabinet.

Secretary of State John Kerry congratulated Tillerson, stating he would help facilitate a transition to the new administration.

“The State Department will continue to provide our full support for a smooth transition, so that the incoming administration can pursue the important work of U.S. foreign policy around the world,” Kerry said.

The search for Trump’s top diplomat has made headlines for weeks as the president-elect began filling out his cabinet. One leading contender, 2012 GOP presidential candidate Mitt Romney put a statement on Facebook Monday stating he was out of the running.

“It was an honor to have been considered for Secretary of State for our great country,” Romney said. “My discussions with President-elect Trump have been both enjoyable and enlightening. I have very high hopes that the new administration will lead the nation to greater strength, prosperity and peace.”

On Friday, former New York City Mayor Rudy Giuliani took himself out of the running as a contender for the top diplomatic post.

John Kelly to Step Down as White House Chief of Staff