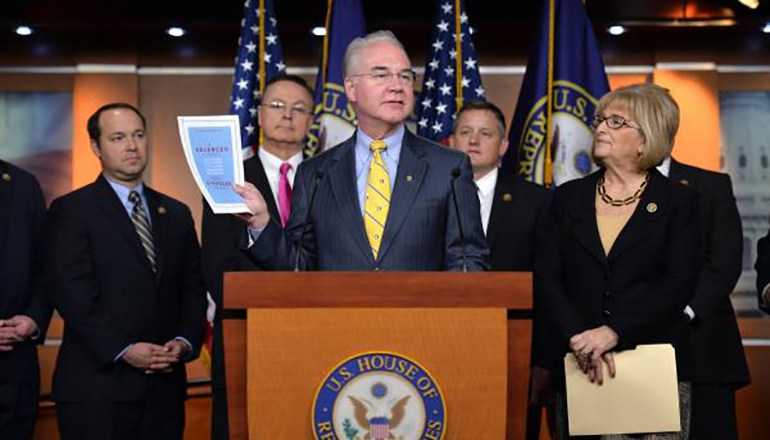 President-elect Donald Trump has selected Rep. Tom Price of Georgia, a strong critic of President Barack Obama’s sweeping health care law Obamacare, as his pick for Secretary of Health and Human Services (HHS) to help with his campaign promised of vowing to repeal and replace Obamacare.

“Chairman Price has earned a reputation for being a tireless problem solver and the go-to expert on healthcare policy, making him the ideal choice to serve in this capacity,” Trump said in a statement announcement. “He is exceptionally qualified to shepherd our commitment to repeal and replace Obamacare and bring affordable and accessible healthcare to every American. I am proud to nominate him as Secretary of Health and Human Services.”

Price, in the news release said he was “humbled by the incredible challenges that lay ahead.”

Trump also announced Seema Verma, the founder of a health policy consulting company, SVC, to lead the Centers for Medicare and Medicaid Services, a division of the HHS and overseas government funded health programs for the poor and elderly. During her tenure, Verma has extensive experience redesigning Medicaid programs in several states, including in Indiana, where she was the architect in creating the nation’s first consumer directed Medicaid program.

“I am pleased to nominate Seema Verma to serve as Administrator of the Centers for Medicare and Medicaid Services,” Trump said. “She has decades of experience advising on Medicare and Medicaid policy and helping states navigate our complicated systems. Together, Chairman Price and Verma are the dream team that will transform our healthcare system for the benefit of all Americans.”

Price was elected to Congress in 2004 and has served as chairman of the Republican Study Committee. The Atlanta lawmaker has played a leading role in opposing Obamacare and has drafted several comprehensive bills to replace it. The “Empowering Patients First Act” that was vetoed by President Obama includes GOP plans of a health savings accounts and allowing interstate insurance sales.

As HHS Secretary, Trump will depend heavily on Price to help replace Obamacare by regulatory process as Congress works to repeal the legislation and replace it with iterations of Price’s recent 2015 bill and House Speaker Paul Ryan’s overhaul proposal, titled “A Better Way.”

During the GOP primary, Price was one of the first House committee chairmen to endorse Trump in May. Along with his endorsement, Price organized a joint statement by nine GOP House committee chairs to also pledge loyalty to Trump candidacy, calling on all “Americans to support him.” A week before the election, Price campaigned with Trump in his Miami-area golf resort to denounce Obamacare premiums that are set to soar next year.

Republicans have lauded the appointment of Price due to his experiences as a physician and a lawmaker. House Speaker Paul Ryan released a statement shortly after the announcement that Price is the “absolute perfect choice for HHS Secretary.”

“This is the absolute perfect choice,” Ryan said in a statement. “Tom Price has made health care his life’s work. As a legislator, he has played a leading role in developing conservative health care solutions that put patients first. We could not ask for a better partner to work with Congress to fix our nation’s health care challenges.”

On the other hand, Democrats are voicing their opposition to Price, due to his proposed and detailed position on Obamacare. Incoming Senate minority leader, Senator Chuck Schumer said Price is “out of mainstream” regarding the Affordable Care Act.

“Congressman Price has proven to be far out of the mainstream of what Americans want when it comes to Medicare, the Affordable Care Act and Planned Parenthood,” Schumer said in a statement. “Thanks to those three programs, millions of American seniors, families, people with disabilities and women have access to quality, affordable health care. Nominating Price to HHS secretary is akin to asking the fox to guard the hen house.”

Vermont Senator Bernie Sanders called the choice a “hypocrisy” since Price “has a long history of wanting to do exactly the opposite of what Trump campaigned on.”

Both Price and Verma would require Senate confirmation.

Trump Unveils ‘Deal of the Century’ for Middle East Peace