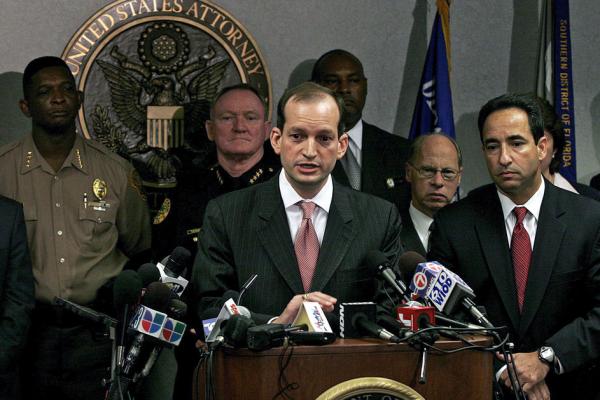 President Donald Trump announced Thursday his plan to nominate former National Labor Relations Board member R. Alexander Acosta to serve as the next secretary of Labor, replacing Andrew Puzder, who withdrew his name.

“The nominee for Secretary of the Department of Labor will be Mr. Alex Acosta,” Trump said at his first White House press conference. “He has had a tremendous career. He’s a member and has been a member of the National Labor Relations Board and has been through Senate confirmation three times, confirmed and did very, very well. He is going to be a tremendous Secretary of Labor.”

Acosta was appointed to the National Labor Relations Board by former President George W. Bush in 2002. In 2003, Acosta was tapped by Bush to be the assistant Attorney General in the Justice Department’s Civil Rights Division in 2003. He also served as a judge on the U.S. Court of Appeals for the Third Circuit and as a U.S. attorney for the Southern District of Florida.

“Throughout his career, Alex Acosta has been a passionate advocate for equal opportunity for all Americans,” Trump said in a statement. “His extensive experience has tremendously impressed me and my team and makes us confident that he will lead the Department of Labor with the utmost competence and determination to support the American worker.”

Trump added, “Alex is going to be a key part of achieving our goal of revitalizing the American economy, manufacturing, and labor force. I call on the Senate to swiftly confirm this highly qualified and deserving leader so that he can get straight to work for the betterment of the American people.”

“I thank the President and his staff for their confidence in me and I am eager to work tirelessly on behalf of the American worker,” Acosta said in a statement.

Puzder removed his name from consideration on Wednesday after Republican Senators began to oppose his nomination. The White House was informed Tuesday night that Puzder might lack the majority vote needed to confirm his nomination.

The CEO of Hardee’s fast food chains faced heavy criticism from Democrats due to his position on labor issues, including his opposition of raising the minimum wage.

The Senate Committee on Health, Education, Labor, and Pensions said they will move promptly on Acosta’s confirmation hearing.

“Mr. Acosta’s nomination is off to a good start because he’s already been confirmed by the Senate three times,” Senator Lamar Alexander, Chairman of the Senate Health, Education, Labor and Pensions Committee said. “He has an impressive work and academic background.”

“Unlike Andy Puzder, Alexander Acosta’s nomination deserves serious consideration,” AFL-CIO President Richard Trumka said in a statement. “In one day, we have gone from a fast-food chain CEO who routinely violates labor law to a public servant with experience enforcing it.”

If confirmed by the Senate, Acosta would be the first Hispanic member serving in Trump’s cabinet.

Trump Designate North Korea as a State Sponsor of Terror