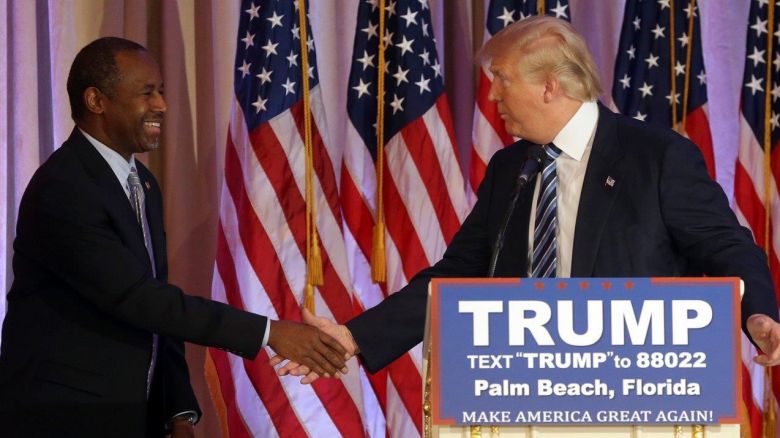 “I am thrilled to nominate Dr. Ben Carson as our next Secretary of the U.S. Department of Housing and Urban Development,” Trump said in a statement announcing Carson nomination. “Ben Carson has a brilliant mind and is passionate about strengthening communities and families within those communities.”

“We have talked at length about my urban renewal agenda and our message of economic revival, very much including our inner cities. Ben shares my optimism about the future of our country and is part of ensuring that this is a Presidency representing all Americans. He is a tough competitor and never gives up,” Trump added.

I am seriously considering Dr. Ben Carson as the head of HUD. I’ve gotten to know him well–he’s a greatly talented person who loves people!

“I am honored to accept the opportunity to serve our country in the Trump administration,” Carson said in the statement. “I feel that I cam make a significant contribution, particularly by strengthening communities that are most in need. We have much work to do in enhancing every aspect of our nation and ensuring that our nation’s housing needs are met.”

Carson hinted at the HUD position in a Facebook post during the Thanksgiving break, writing that he will be “praying” and signaling that he would be joining the administration and the announcement would be forthcoming.

“After serious discussions with the Trump transition team, I feel that I can make a significant contribution particularly to making our inner cities great for everyone,” Carson posted on Facebook. We have much work to do in strengthening every aspect of our nation and ensuring that both our physical infrastructure and our spiritual infrastructure is solid. An announcement is forthcoming about my role in helping to make America great again.”

Just shortly after the announcement, Carson tweeted his acceptance and honor to serve in the Trump administration.

Carson is the first former GOP primary rival and the first African American nominated for Trump’s Cabinet. As the case for all cabinet secretaries, Carson will first need to be confirmed by the Senate.